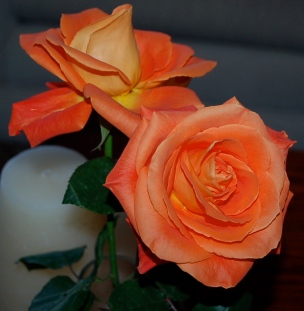 I saw in the news that a small floral business owner was interviewed for her decision not to supply the flowers for a same-sex marriage.  It was interesting listening to her, because she kept referring to her religion, and adding that she had been receiving hate mail and threats because of her beliefs.  Though my spiritual views are decidedly different from this woman’s, there is no excuse for bullying her.  This woman has a right to state her views without provoked hostility in return.  Her views are far from religious, however.  They are up close and personal with fear.

After you ponder the situation, one needs to point out to her that SHE was not invited to the wedding…she was not asked to bless it, condone it or support it.  Her flowers only were requested to be there.  Do her flowers share her religious views?

This was a specific wedding, so the participants were obvious.  Does the woman check backgrounds of everybody she sells to?  Does she know that the couple celebrating their anniversary with her flowers are atheists?  Or that she sent birthday flowers to a drug addict?  If she doesn’t do background checks on all her customers to see if they share her “religious views and beliefs”, this stance of hers has nothing to do with religion and everything to do with discrimination.

That woman fears, not prays.  She fears a homosexual person is a sexual predator, just waiting to pounce on innocent people who stroll into his/her space.  She is scared out of her mind.  Literally.

I understand fear.  I can appreciate how it clouds all rational thought and behavior.  Many religions are based on fear to keep the members inclined to follow the Church’s rules.  This woman is probably unaware of her real fears, and no doubt feels a familiar and false sense of “religion” in taking this discriminatory stance.  It must be confusing to her.  Sadly, what was needed in this instance was courage to do the right thing, not fear to do the wrong thing.

Business has fallen since the woman took her stand, and I am not surprised that she is experiencing monetary repercussions.  It’s called karma.  She is being judged for her religious views, and not for her floral arrangements.  Seems only fair.

Happily – for most of us – civil liberties will remain in harmony with religious, spiritual or atheistic beliefs, and flowers will be present to brighten our tables and our hearts.